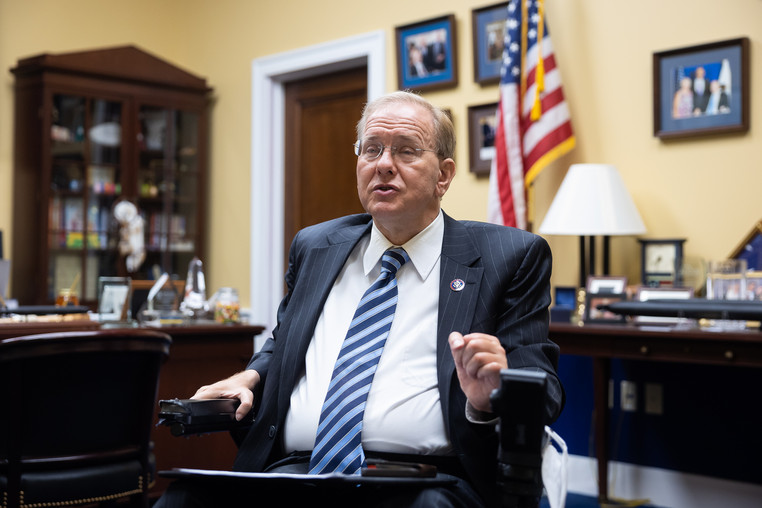 With help from Derek Robertson

In the third installment of our regular Friday feature, the Future in Five Questions, Rep. Jim Langevin (D-R.I.) — chair of the House Armed Services Committee’s Subcommittee on Cyber, Innovative Technologies, and Information Systems — weighs in on his hopes for the rollout of self-driving cars and competition with China.

Responses have been edited for length and clarity.

Self-driving cars. It’s going to automate transportation in cities and especially in rural areas, allowing more freedom of movement for people, especially people that don’t drive. It’s going to enhance our ability to move goods and cargo around the country perhaps more efficiently once it’s perfected.

I’m excited for what self-driving cars offer: Autonomous driving that allows for people with disabilities to be able to live more fully and independently in their communities. In my case, I have a driver to get me everywhere, it would be nice to have the independence just to get in the car and be able to drive by myself safely. [Langevinis the first quadriplegic to serve in the House.]

What’s one technology you think is overhyped?

TikTok I think is overhyped. I’m personally sick of hearing about TikTok and I don’t quite understand it — but maybe that’s because I’m not a Gen Z user of TikTok.

I also have serious security concerns about TikTok and its ties to the Chinese government and its ability to collect data on U.S. persons. In this day and age of machine learning and AI and datasets, we don’t know how that information could be usable now or in the future.

What book most shaped your conception of the future?

The book that I’m reading right now is called “‘Kill Chain”’ by Chris Brose, the former national security adviser to John McCain. The foreword talks about John McCain’s concern that China was outmaneuvering us and out-investing us in both future advanced technologies that will give them an asymmetric advantage, and in technologies that invest in undermining our technological advantages.

I still believe that we have the edge, but I also know that if we don’t keep our eye on the ball and invest in next generation technologies — and creating a culture where we accept smart failure and being able to push the envelope — things like hypersonics could fall behind.

What could the government be doing on tech that it isn’t?

If we don’t want to get outmaneuvered by future technologies, we’re going to need to be more involved with industrial policy. During the Cold War, or the eighties and nineties, we were confident the private sector would out-innovate our global competitors, and for the most part that worked, that was true. It’s not true in the 21st century now.

Think 5G, as an example. The United States and our partners and allies around the world got outmaneuvered by China and Huawei, and they developed the next 5G technology. Then they were involved already with laying down that infrastructure for 5G until the national security concerns finally got raised to the highest levels. We need to invest in whatever the next technology is that comes after 5G, so 6G or 10G.

The other thing is that I would say that we the government could be doing more is encouraging smart failure, especially within government. Companies like SpaceX get that, and Elon Musk is one of those people that believes in pushing his people hard and that if you’re not failing, you’re not trying hard enough. We need to instill that cultural shift here and within government in our R&D efforts.

What has surprised you most this year?

That offensive cyber operations weren’t used widely and aggressively in both Ukraine or against the United States and our partners and allies by Russia.

There are a variety of reasons for that, some of which we’ve been working on. We’ve been forward-deployed with working with our partners and allies around the world to make sure we’re helping to shore up their cyber defenses. We’ve been more resilient, but we haven’t seen the Russians being as aggressive in offensive cyber operations as we had anticipated.

It’s been quite the week for tech on the Hill, but the party’s not over yet.

As POLITICO’s Brendan Bordelon reported for Pro subscribers in today’s Morning Tech newsletter, the Senate’s appropriations bills introduced this week include an additional $1.5 billion boost to the National Science Foundation to promote “applied research,” or the process of figuring out how to translate breakthroughs in the lab into tech for everyday use. That’s on top of the “Chips and Science Act,” which rolls together microchip manufacturing subsidies and funding for research in areas like quantum computing, AI, and more, passing the House with little drama yesterday on its way to President Joe Biden’s desk.

The so-called Chips-plus-Science bill sends $20 billion to NSF for those technologies, as well as the development of 6G and “advanced manufacturing” (i.e. semiconductor manufacturing). And if you thought legislators would stop there, think again: Brendan also reports today that Democratic senators are already considering reviving tech competitiveness legislation that’s fallen by the wayside during the long negotiation process, including provisions around building out the supply chain and providing green cards for STEM-savvy immigrants. — Derek Robertson

FACT CHECK: Here’s a headline that may have been flooding your Twitter feed today: “50-Foot-Tall Adam Schiff Announces Findings of January 6th Committee in Fortnite,”

Although we can’t blame you for believing it might be true given the game’s massive popularity and use for other non-gaming purposes, like a Travis Scott concert, we are sorry to say this is a satirical article from the “Onion”-like video game humor website Hard Drive.

Quoth Hard Drive’s fictional PR flack for Epic: “Marshmallow, Travis Scott, Weezer, Star Wars, the Democrats, we’ll scan anybody into this game if they pay us enough money and get people to play Fortnite for a few moments longer than they normally do.”

If such a thing were to actually happen in the future, the rationale might not be that cynical given the all-encompassing nature of the promised metaverse. For now just enjoy Hard Drive’s delightful photoshop of Schiff looming over the “Fortnite” landscape, and have a great weekend. — Derek Robertson

If you’ve had this newsletter forwarded to you, you can sign up here. And read our mission statement here.