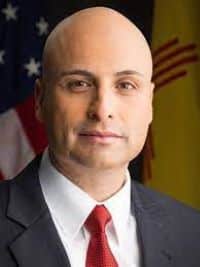 From the Office of the Attorney General:

Lucher was charged with one count of distribution of Child Sexual Abuse Material (CSAM) and one count of possession of CSAM in 2019.

On the day his trial was to commence, Lucher pled guilty to both counts and faces a maximum of 21 years at sentencing, which will be held at a later date.

“No child should be treated like a sexual object, and my office will always hold those accountable who exploit our most vulnerable,” Attorney General Balderas said.

A proactive online investigation into file sharing networks by the Internet Crimes Against Children (ICAC) task force, which is based in the New Mexico Office of the Attorney General, led to James Lucher’s residence. A search warrant was executed, and forensic analysis of electronic devices owned by Lucher revealed files of CSAM, also known as child pornography.

The case was investigated by the Internet Crimes Against Children (ICAC) task force and the Bernalillo County Sheriff’s Office with assistance from the Federal Bureau of Investigation, the National Center for Missing and Exploited Children, and the Regional Computer Forensics Laboratory. It was prosecuted by Assistant Attorneys General Jonathan Gardner and Ashley Schweizer.

The case was brought as a part of the New Mexico Internet Crimes Against Children (ICAC) Task Force’s mission, which is to locate, track and capture internet child sexual predators on internet child pornographers in New Mexico.

There are more than 90 federal, state, local and tribal law enforcement agencies associated with the New Mexico ICAC Task Force, which is funded by an Office of Juvenile Justice and Delinquency Prevention (OJJDP) grant administered by the New Mexico Office of the Attorney General.

Anyone with information relating to suspected child predators is encouraged to contact federal or local law enforcement or make an anonymous report through the National Center for Missing and Exploited Children at http://www.missingkids.org/cybertipline or by calling 1-800-THE-LOST (1.800.843.5678).